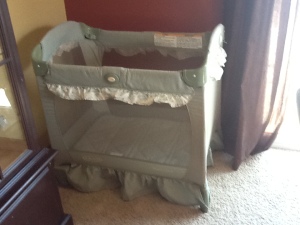 Nope this isn’t a post about the maximum security prison in the county of Jackson southeast of Grand Rapids…it’s a post about maximum security from a stinker of a 2-year-old named Jackson!  This my friends…also knows as a pack & play…is “time out”…or “Jackson Jail”.  Yesterday our little guy’s world was turned upside down based on his disobedient choices…and the consequences were brutal!

I just could not post a photo of Jackson IN jail because seeing him cry breaks my heart…to which my husband demanded that I needed to begin disciplining him.  However on his very first trip to the “T-O”…as Daddy calls it…Daddy came up to me and said “Why is it so much harder to discipline this one?  He’s just SO darn cute!  I mean…he’s the one we didn’t think we were going to get.  The first 2…I had no problem tossing them in there!”  My point exactly!  Jackson just seems so much younger at 2 than his brother and sister did.  He’s still a baby!  He just didn’t seem ready for actual discipline.  Well the past few days when I would tell him that we don’t do things like take things out of the trash (he has mastered baby-proof cupboard latches) or take the stool from the bathroom into the kitchen (the KING of resourcefulness I’m telling you!) and play on Mommy’s iPad or get up onto the bar stool and put her wedding ring that was on the island countertop into the nearby vase sending her into a panic until she finally found it…to a screeching giggle of glee from the culprit who ran as fast as he could out of the room.  Not UNTIL I found it of course…and he did not show me where he had PUT IT!  AH!  All of those times I told him to stop doing those things he would look right at me with a devilish (but such a cute!) smile and those eyes…oh those eyes that say ‘I can do whatever I want and get away with it….what….what are you going to do about it-?”…and go right at it AGAIN! Oh! It’s TIME!  He knows what he’s doing and he needs to learn that there are consequences for his actions!

I, like Jackson, put myself in jail this morning.  I woke up exhausted from little sleep…on top of the daylight savings time change to which my body is still paying for…to a really.bad.attitude!  There are many days I still struggle with not being a morning person…and this one took the cake!  I rustled up a quarrel with my wonderful husband and when he left I was so grouchy!  Ugh I was grouchy!  I got ready and on the way to take Emalynn ot school I brought him his phone which he forgot and I told him WHY I was grouchy.  Later as I was walking through Meijer…still grouchy…it dawned on me that I did this to myself.  I put myself in a jail of misery based on my own selfish, sinful choices to be grouchy. Exhaustion is never an excuse to be selfish which for me usually leads to sin.

I needed a get-out-of-jail card though it certainly wasn’t free.  I had hurt my husband and I had hurt myself and I needed someone to rescue me…just like Jackson needs me to rescue him from his isolating confinement.   I needed Him to come over and tell me that He loved me..and everyone else…and that we don’t hurt other people’s feelings by our grouchiness because we are tired.  It isn’t nice and WE.DON’T.DO.THAT!  Is that loving my neighbor as I love myself?  The Lord wrapped His arms of love around me and told me exactly what I needed to do to get out of jail….and just like Jackson…I remorsefully said “okay”.  I said I was sorry…not only to my husband…but to my Lord…and they both graciously forgave me getting me out of my misery.

Being locked in a jail by our selfish, bad choices in not fun..the consequences can be brutal!  But…there is a way out.  While it isn’t always fun it is so much better when we are out of it and…hopefully…we have learned something from it!  Sometimes it takes longer than a simple ‘I’m sorry’…but taking those steps to not only realize what we’ve done but move in the right direction toward reconciliation can be so freeing.  The only hope we have for getting ourselves out of the messes we get ourselves into is Jesus.

He’s waiting and ready to get us out of any jail we put ourselves into…and today is WAY too nice of a day to spend in jail!

Confess your sins to each other and pray for each other so that you may be healed. The earnest prayer of a righteous person has great power and produces wonderful results.  James 5:16  NLT